This blog post is going to be about a video game, the career ladder, the Peter principle and Happiness research. And if you skip checking out the hyperlinks in this blog you are only eating the buns off this tasty burger.

I am a gamer. And although I am now exclusively committed to my xbox, my earlier gaming were on the PS2 and a Dell laptop. And it was on that Dell that I stumbled onto this game called ‘Caesar 3’ sometime in 2004. It’s under a genre of gaming called  CMS games (Construction and Management simulation). The most famous of this genre is SimCity which spawned the mega hit ‘The Sims’.

what Caesar 3 was all about : you have to start as a ‘village settlement leader’ in Roman times and help that village achieve a few key metrics (grow population to X, increase quality of housing, lower unemployment) and when you do, you get a designation-promotion and given a bigger and more challenging assignment. Some towns have a persistent barbarian invasion threat, some settlements are on arid land where crops wilt. The city is viewed in a two dimensional isometric view with a fixed magnification level, and can be rotated ninety degrees. When/If you beat all the assignments you become (drumrolls)……………….. ‘The Caesar!’

This game is tremendously absorbing and it is not too difficult to start and then become cripplingly addicted to it. I did and was. Watching a city grow under your care into a thriving happy place. And the more you play the more you get vested and sucked in.  This game taught me a ton about what I needed to know about the concept of ‘Career Ladder’.

At the earlier game levels the pace and tempo was mild and one got a chance to occasionally step back and just watch the city slowly grow and one could even leisurely zoom in and interact with the citizens and ask them ‘Sup?‘. 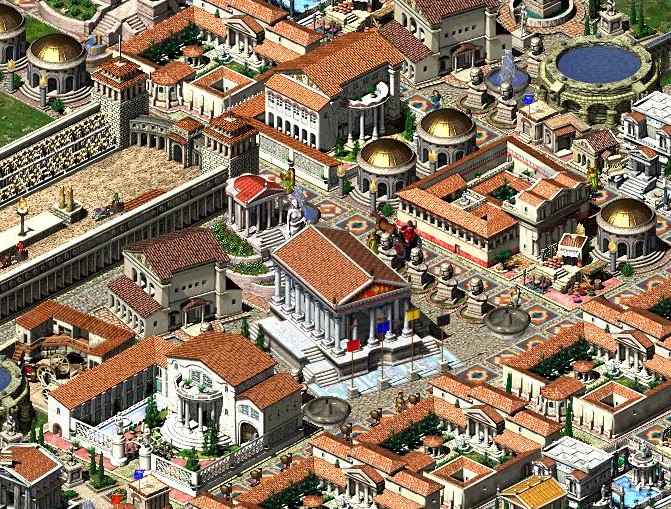 But at the advanced levels it was absolute a balls to the wall mad hatter party. Your city was big, the goals lofty and the operational tempo and daily fires numerous. If the barbarians weren’t beating at your gates, a fire in a section begged attention or a crippling famine was imminent. As the Mayor you were just shuttling from one crisis to another. I bet my mayor avatar inside the game was on his third divorce. Was it very absorbing ? You bet. Fun ? Hell yes. But I wondered if my Mayor ‘avatar’ and his family missed some of their earlier assignments. I would have if it was me!…esp since in some of previous assignments you got to really know your terrain, the town dynamics and area’s SWOT Rome lost a good mayor every time they transferred him (me) out to a different assignment.

The logic in the game mirrors logic in the corporate world : To reward excellence in a role –remove the person from the role! The greatest managers make a clear distinction between knowledge, skills, and talent, where talent is defined as natural recurring patterns of thought in a person. While knowledge and skills can be taught, talent cannot be. A key of management success then becomes finding the right kind of person for a given job. The best players are not automatically the best coaches. The skillset is different. Which now allows me to segue to The Peter Principle. = “In a hierarchy every employee tends to rise to their level of incompetence”

Dr.Lawrence J Peter was a observant genius. The principle he game his name to was first showcased in 1969….41 years later it seems MORE valid than ever. It is to the eternal shame of business schools that they don’t give this more coverage and study in the syllabus. Less classes on creating the next toxic subprime and more time on this stuff may be the way to go (I loved this recent gem : “Any sufficiently advanced financial instrument is indistinguishable from fraud.”). Don’t you, in some of the unnecessary meetings you are forced to join, slyly look around the conference room and wonder HOW half these idiots made it this far ? Voila! : The Peter Principle in action. Of course the others are looking at you and wondering the same thing.

Which leads me to Happiness and its research implications. Maybe at the certain place in time on your career ‘ladder’ you may wanna stay put or lower the speed to perambulate vs running. Princeton University’s Woodrow Wilson School concluded it’s a good idea to do it when you hit about $75,000 a year.

Here is a thought experiment : Let’s fill a small stadium with ALL the Fortune 500 CEOs and all their Admins. Who do you reckon is less stressed, healthier and happier with their life as a group ? Not richer. Happier. For me it’s not easy to answer this with ease or confidence and THAT raises more questions for me about what should I be chasing.

Definitive research on performance and stress dates back almost a century, to the work of psychologists Robert Yerkes and J.D. Dodson. In 1908, they came up with what is known as the Yerkes-Dodson Law, which goes like this: Performance increases as pressure increases, because stress-related hormones actually improve concentration. This occurs until a certain critical point — it’s different for every individual — at which the pressure exerts a negative impact and performance plummets. Graph it out, and you get something that looks like an upside-down U, with good stress on the left side of the curve and bad stress on the right. One thing that companies like Goldman, Ernst & Young, and Boston Consulting Group do is recruit people whose Yerkes-Dodson inflection points are much higher than average. “High achieving people generally like pressure,” says Kerr. But are ALL corporate employees like this ? Are you ? Maybe. But ALL trajectories for ALL good employees technically leads to the C-Suite. Is this standardized approach the way to go ? Ask yourself how high your Yerkes-Dodson inflection point is. Can you REALLY handle it ??  Or is society just egging you on because it, as a hive mind, knows no better ? Daniel Gilbert is onto something and you and I may be taking part in a race with a murky ending (the posh word is ‘affective forecasting’). Maybe sometimes ‘Small but happy town mayor’ would have been a good place to wrap a game.