Most serious runners know the lame origin story of the Marathon. The fascinating real tale tells of how the Greeks repelled the Persians using superhuman grit to run from one battle to a potential one. So do yourself a favor and read this short but fantastic story of its true origins.

I knew of the story a while ago but until last month it was just that. A nice tale. Until it hit me recently that I am in Athens. In a hotel LESS THAN 2 MILES AWAY FROM THE ORIGINAL MARATHON ROUTE. Thankfully, like Forrest Gump, I keep finding myself in spots close to the action.

This had to be done right.

So first I went to Mapmyrun.com to dig up the original route run by the Pheidippides (in 490 B.C, the same year when it was last safe to walk about in Delhi). I overlaid that route on mankind’s second greatest invention after fire, Googlemaps, and then exported it to my present favourite running app ENDOMODO. So now I had real idea of the path start to finish here in modern Athens. But I was not sure if the path even had a decent running route along the way. You see Greece is the original EU nation that went tits up in the 2008 crisis and even now it is in bad shape. Think ugly love child of Patna and Brussels. The city has a very gritty feel to most of it and so nothing that you would take for granted in London or Amsterdam, example – decent pedestrian routes, you could never take for granted here. Luckily I am from India so I have been trained since birth to always start with low expectations. Still, there was only one way to be sure. Go and confirm it visually. Or in the immortal words of that Pakistani treasure Taher Shah, I had to see it EYE TO EYE.

So a few days ago I decided to incorporate a tiny 2k part of the route  into an 8K run. Then I noticed that the path was fully dedicated to traffic and pedestrians were a distant afterthought. This is what happens when a city and the state goes bankrupt. The inability to capitalise on so glaringly a treasure. The Athens Mayor could make this a tourist gold mine if he wanted to, with just a small investment on a 42K running trail. Running is becoming more popular by the year globally so I can imagine how a small investment in a trail and some good marketing could pull in the running fans. Esp since the Acropolis is a bit underwhelming at daytime.

The Marathon as a long-distance running event has an official distance of 42.195 kilometers. The maximum I have run non-stop in one session is 10 kilometres. So there was no way I was going to be able to run the full route without literally killing myself. That tradeoff is not worth the braggable. The current marathon world record time is 2 hours 3 minutes and 23 seconds (set in the Berlin Marathon by Wilson Kipsang of Kenya on 29 September 2013). I mashed numbers and set what I though I could just maybe attempt : Run AS LONG AS Wilson and see if I can finish a THIRD of the 42 kms route i.e 14 kms. That  distance is warm up to some friends of mine : esp TimTim Sharma who came second in the 2013 Bombay Marathon and Gopu who ran the Boston in 2012. As for me, this would be the longest non-stop run I would have ever attempted. I bet the entire original route was the same for Pheidippides. That one allegedly killed him so that was an ominous warning right there on the tin.

Last Sunday was the day I zeroed on. Sunny, minimal chance of rain and because it was a Sunday, lesser traffic than usual. which is important because the Greeks drive like Indians and look at pedestrians the way a mean Lion looks at a thin gazelle. As a challenge and dare.

Athens summer is not exactly balmy. In the afternoons it gets quite hot and uncomfortable so I decided to wait in my hotel for the sun to almost set (weather.com pegged sunset at 8:45 PM). I set off on the run at 8:01 PM, less than an hour before sunset since it was relatively cool and the light was still out. I needed that light to judge traffic and the route . The original route runs from the town of Marathonas and terminates at the Panathenaic Stadium in central Athens. Since the Panathenaic Stadium was close to my hotel, I decided to run the opposite route: From Panathenaic Stadium towards Marathonas. The advantage of running solo is you can do what you damn well want. 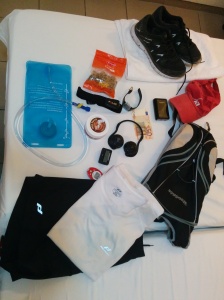 The electronic heart of it all : my beloved Nexus 5

Endomodo that I use to track my route and run stats.

trusty google map to keep an eye on the entire route.

I started at 8:01 PM, right at the stadium entrance, after 1 last viewing of the new amazingly motivating Dre Ad. 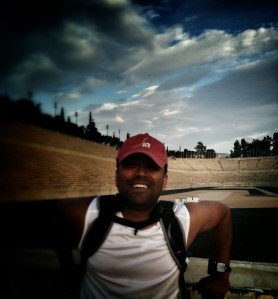 Every time I felt too cramped or out of breath I slowed up considerably and took pics on my phone!

At the start, I was surprised to see no crowd beyond a few straggler tourists at the stadium.

The route initially  is pretty wide for running for the first 5 odd kilometers since it is in the city center, with just one very major traffic crossing.

The route passes right by the American Embassy in Athens (“The NSA is pointlessly recording all this from your phone. You are welcome”)

Some parts of the route reminded me of CP in Delhi, but with less stray dogs.

I passed probably the classiest bakery shop on earth. There was a live PIANO PLAYER in the place. At a Bakery! 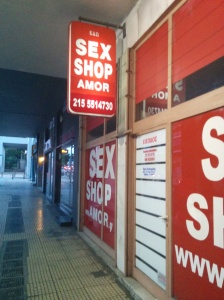 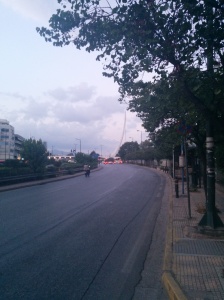 Passed a cheaper version of the Erasmus Bridge in Rotterdam

and damn was there distracting temptations on the route..this one almost derailed the entire plan 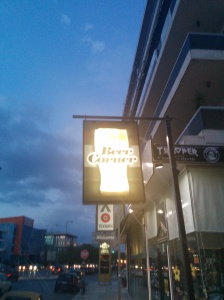 And on and on.

14.16 kilometers were behind me and I was still in one tired sweaty piece. 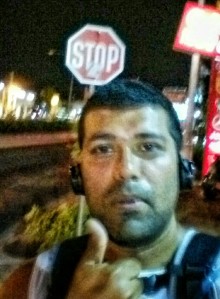 So that was the end of that.

Rewarded myself with my favorite drink discovered while in Athens : Tequila flavored Beer! 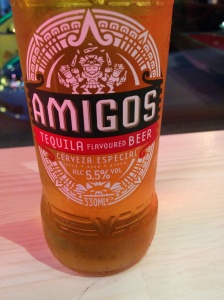 I loved planning for  and then executing this run. Happy with the not-so-impressive fact that I can run at the very least one third of a marathon in the time  the fastest runner can finish it. ergo I am 200% slower than the fastest marathoner in history. Reassuring.