I just finished reading a piece by the always thought provoking Paul Krugman of the NYT. An Article entitled ‘Eat the Future’ , talking about how the GOP is sacrificing the future for the present over in US. It bought back to mind an article a while ago about free TV sets distribution by a corrupt party (are there any other?) that won elections in Tamil Nadu, India. Which I could parallel park next to an op-ed column ‘Serious in Singapore’ by Thomas Friendman published on January 29 about Singapore’s investment into the educational sphere.

Graphically these decisions by policy makers should all come into one of these four boxes :

Have you read the novel Dune ? You should. Wikipedia states “Dune is frequently cited as the world’s best-selling science fiction novel” In Dune you read about (no spoilers) a massive project undertaken by one party (Bene Gesserits) that demands investment by the new few generations so that generations much much into the future could enjoy a better future. Metaphorically, think of it like a tree that needs to be religiously tended by you and the next 16 generations, no payoffs, so Generation 17 onwards could enjoy its bountiful fruits.

Would you and I even think about planting this tree ? Could our current crop of politicians and policy makers be that altruistic ? Could a company or division expected to show good news in the next quarter ever contemplate a really really  long term investment ? Why does mentoring, leadership training and  executive development face minimal investment of time in most places ? In his absorbing memoir  ‘Straight from the Gut’, ex-GE CEO Jack Welch talks about the flak he took when he made it clear he was going to invest in a manangerial Über School inside GE (GE’s Crotonville Campus). Circles of Causality are real and Jack knew it. We all should. Esp the CEOs, Politicians and Policy Makers who call the shots on long term investment. But maybe they all are only a reflection of the larger malaise of a whole generation bought up on the joys of instant gratification ? After all we get the politicians we deserve.

I was re-reading Senge’s masterpiece ‘The Fifth Discipline‘ recently and that book and the always fascinating concept of Systems Thinking it delves into allows you to examine these above policies in new light. Here is a quick summary of systems thinking :

Here is what I hope you to remember from this post as a Systems thinking caveat : Cause and Effect are not closely related in time and space. The ‘consequence boomerang’ comes back in a bit and not always to the same place it was thrown from.

Senge warns us that underlying all of the above problems is a fundamental characteristic of complex human systems: Cause” and Effect are not close in time and space. By “effects,” I mean the obvious symptoms that indicate that there are problems—drug abuse, unemployment, starving children, falling orders, and sagging profits. By “cause” I mean the interaction of the underlying system that is most responsible for generating the symptoms, and which, if recognised, could lead to changes producing lasting improvement. But most of us assume, most of the time, that cause and effect are close in time and space. As we are since a million years ago since walking upright.

When we play as children, problems are never far away from their solutions—as long, at least, as we confine our play to one group of toys. Years later, as managers, we tend to believe that the world works the same way. If there is a problem on the manufacturing line, we look for a cause in manufacturing. If salespeople can’t meet targets, we think we need new sales incentives. If there is inadequate roads, the solution must be more roads.

Moral : The next time you need to make a decision that is a trade off, remember some consequences may not be visible immediately.  And they may be serious consequences . A cigarette feels great IN THE MOMENT. 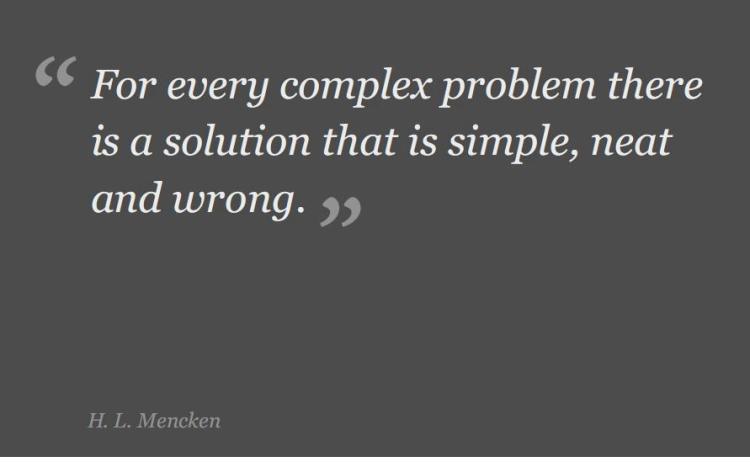