2012. As a avid cinephile I can confidently say this: What a treat this year it has been. 3 entities deserve the lion’s share of my grateful credit for guiding me to the right movies in a world that abounds with the wrong ones.

1. Roger Ebert ~ He remains the final word on movie reviews for a lot of people. Before I even downshift a movie into a contender to join my ever increasing ‘Stack of Shame’, my first conscious act is to go to google.com with the search string “EBERT [NAME OF MOVIE]”; I even managed to read one of his books this year : “Your movie sucks” | A gem of a review from that book : “The movie has the hollow, aimless aura of a beach resort in winter: The geography is the same, but the weather has turned ugly” & my favorite funny line : “Wolf Creek is more like the guy at the carnival sideshow who bites off chicken heads. No fun for us, no fun for the guy, no fun for the chicken. In the case of this film, it’s fun for the guy”

2. Metacritic.com ~ this site aggregates reviews from all around and displays a score on a 1-100 scale. Anything above 60 is not bad at all. Above 80 is approaching awesome and above 90 is in the territory that is more distant from RA-ONE and ROBOT than Triangulum Galaxy is from here. While it has never been easier to become a cinema autodidact, Ebert and Metacritic go a long way on the helpful road signs to getting there.

3.Torrents ~ Because the local theatres will still play Dabang, RA-ONE and ROBOT and Netflix is yet to take off in India and because Airtel’s broadband plans are affordable and because I am a lazy bast**d. And because not in a million years will a theater in this banana demockcracy play ‘4 months 3 weeks & 2 days‘ or ‘Still Walking‘.

Great News is it has never ever been easier to get to know about and download good non-Hollywood, non-Bollywood cinema and this trend is hopefully going to get more mainstream. And once you take the blinkers off, WORLD cinema really really opens up to you. And from that non blinkered world, here are my favorite 2012 movies that I absolutely totally relished. 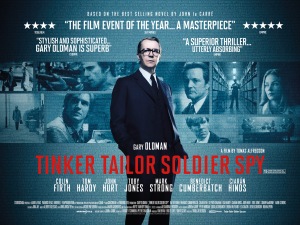 Tinker Tailor Soldier Spy: The only movie I watched where I used the ‘bookmark’ feature of the VLC Media Player. Because I had to revisit some key dialogues and scenes to understand others. So not your average popcorn flick. But patience is richly rewarded. Surprisingly this movie was panned by Ebert as a ‘Meh’. I can see why though. If you don’t engage with the plot very actively, then this one has little to offer and will come across as dense and slow. But if you do engage, it is dark, rich and brooding and I was biting nails just dying to know who the mole in MI6 was. And also appalled at just how depressing 1970’s England was. TTSS’ soul sister is “The Usual Suspects” I think. If you liked that, you will love this one. 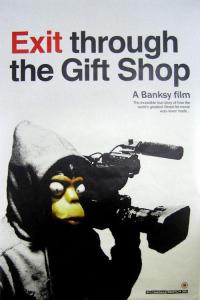 Exit through the Gift Shop: Shows you how cultural snobs can easily be manipulated into rah-rah’ing utter trash. Or… is it trash ?? Had my fave 2012 line in a movie too. And oh, we here need about a million Banksy’ies to undermine the humorless institutions ripe for the undermining here. Is cloning legal yet? 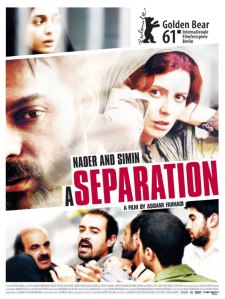 A Separation: The very best cinema I saw in 2012. Period.  Iranian cinema always has a special place after ‘Children of Heaven’ but this one had me on the cliched edge of my seat. And also so so thankful I live in a sham democracy at least. Those guys over there in Tehran. Sad. Reading Presopolis before this will help you understand this movie a lot better. And it is such gripping, well made cinema about a minor altercation gone wrong. A true masterpiece by Asghar Farhadi. 10/10 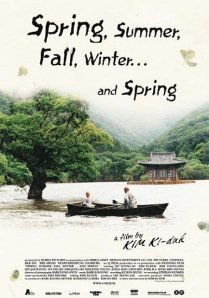 Spring, Summer, Fall, Winter. And Spring : This movie is visual meditation. Only more enjoyable than the real thing. The Oh-so-nuanced pacing. So very different from what you normally expect. This Korean movie by Ki-duk Kim shows you how CGI still doesn’t negate plot and characters. Micheal Bay, are you listening? All the tolly molly bolly etc woods’ here. Pay attention. 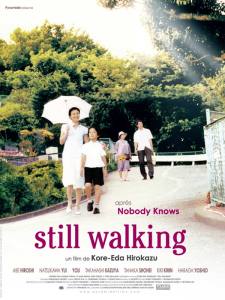 Still Walking: Still Walking is a family drama about grown children visiting their elderly parents, which unfolds over one summer day. You may fall asleep just reading that line. And ADHD afflicted jackasses raised on WWF and MTV will. But those who jump in will savor an excellent Japanese movie that is sublime and truly well made; it’ll shake their world that holds ‘Armageddon’ as the cultural high point of the Hollywood experience. The mother character in the movie especially has some cutting lines and the father-son conflict was so well attended. Try it. 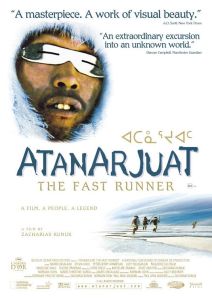 Atanarjuat : A story based on Inuktitut legend. First you start doing what I did. Googling to find out what the heck ‘Inuktitut’ is. I will probably never see a movie quite like this. Chances are neither will you. Although the movie is technically Canadian, the language is Inuktitut. Here is a review I read online that best mirrors my own experience accurately: “I saw this movie last night and went to bed without words. After having a chance to sleep on it, it is now starting to sink in how truly amazing this movie was. You will be first blown away by the fact that this movie even exists. It is truly unprecedented in every sense of the word…The scenery is astonishing. Almost everyone who participated in this production was full-blooded Inuit. It is a beautiful story based on an Inuit legend that exists on many different levels and subplots” 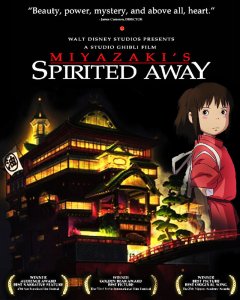 Spirited Away: Guilty admission – I never cared much for ‘Alice in Wonderland’. Too convoluted. There. I said it. Sue me. But if you too didn’t ‘get it’ and carried some sedimentary guilt, redemption arrived in 2003. Spirited Away is that wonderland and its main character ‘Chihiro’ is a way way cooler Alice I wager. Hayao Miyazaki has imagined and crafted a world that sucks you in and I could not help but me amazed by that crazy bathhouse and the characters that filled it. 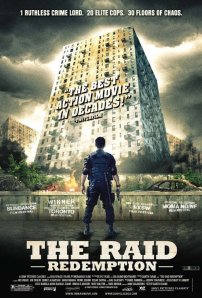 The Raid : One of THE best action movies of all times with the most astonishing one-on-two hand2hand combat you will EVER see in movies (between the brothers and the evil henchman). True story: Actually found myself holding my breath in some parts of this movie. I thought that was a figure of speech till then. Thanks mihirfadnavis for guiding me to this one. 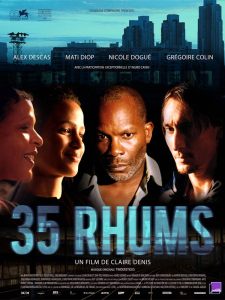 35 shots of rum : This movie is the anti Attention deficit hyperactivity disorder (ADHD) production. There is no plot, only poignancy. If someone of the type who enjoys Transformers and ‘Son of Sardaar’ was strapped into a seat and made to watch this, spontaneous asphyxiation is possible. In which case the movie would have 2 achievements to its credit. Instead of one. Getting rid of a useless cultural gnat AND being a superb meditation on letting go. Alex Descas is so so perfect in his role as a dad who realizes he has to move on. This is fabulous casting indeed. No, PERFECT casting. And words anyway don’t get top billing here. Body language is all. 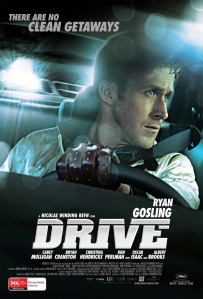 Drive: The most stylish movie on this list. Some (not all) reasons to love it: It has Cranston from ‘Breaking Bad’, busty Christina Hendricks from ‘Mad Men’ and the divine Carey Mulligan from ‘An Education’. And oh, Ryan Gosling. And one of the best car chase scenes this side of Ronin. AND a look at L.A with unbelievable camera deftness. And that track by Kavinsky, ‘Nightcall’. Haunting. And Perfect. At worst, you will enjoy this as a good thriller. But at best, this is drama done very competently. 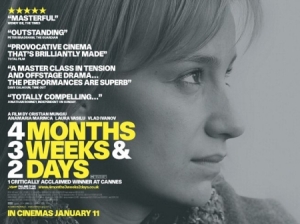 4 months 3 weeks & 2 days: The thing with reading about Communism is that the medium does not do justice to the mundane horror that was life in those unacknowledged prisons behind the Iron Curtain. ‘4 months 3 weeks & 2 days’ is about friendship and the price one friend is willing to pay to be just that and also what both pay as victims in that gulag that was Communist Romania .The bland horror of Nicolae Ceaușescu’s rule and how wretched it was especially for women is artfully told here. It is true that real evil is bland and boring and without pity. And the movie shows you why. While the movie is about the horror of late abortion per se, like a great movie, it is soooo much more than that limited ugly subject. 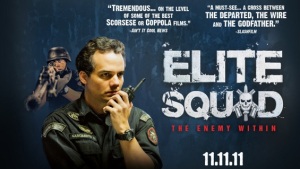 Elite Squad 2 : Another gripping thriller from Brazil and while this is no ‘City Of God’, it’s subject, corruption, is universal and how the main character struggles with it is an abject lesson on why corruption is so hard to erase. Also India needs 1000 battalions to BOPEs to clean up. 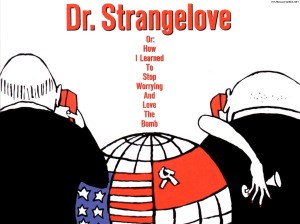 Dr.Strangelove: Rightly claimed by many to be Stanley Kubrick’s THE Masterpiece. Well, it sure holds your attention from the get go. And those lines. “I can no longer sit back and allow Communist infiltration, Communist indoctrination, Communist subversion and the international Communist conspiracy to sap and impurify all of our precious bodily fluids “. I did not know until post viewing that Peter Sellers’ was doing multiple roles including the eponymous one this movie is named after. And here in this movie you also get to see THAT immortal line by President Merkin Muffley. “Gentlemen, you can’t fight in here! This is the War Room!!!” Black comedy at its finest.

The Dark Knight Rises: The Joker in the pack. get it ? Joker ? No? …awww.. why do I bother. Yes I agree. The movie was littered with a shit-ton of plot holes but Bane was just brilliant and the story really gripping. So the hype machine was justified for once. Dark and gritty, TDKR packs a wallop and you will likely leave the theatre happy you got your money’s worth. 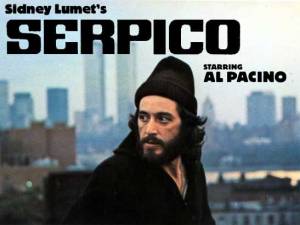 Serpico: I am almost 3 decades late to this party. ‘Dog Day Afternoon’ was excellent but I think Serpico is BETTER. Lumet’s take on the true story of an honest cop trapped in a corrupt system did the smart thing by getting Al Pacino to play the cop. I can’t think how anyone else could be so convincing. Especially his slow dissolve into the muck around him and how it breaks him is painful to watch. Painful but very absorbing. Great direction and genius action. Many movies limp well with one of these two. Here we have both.

So there you have it. 2012. Fourteen excellent pieces of work. Totally good year. Very happy with the cinema consumed. Try a few from the above if it speaks to you. Each one a gem.

2012 Bloody disappointment of the year: That overhyped turd ‘Prometheus‘ 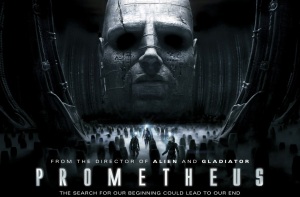 2012 Best Movie quote: From ‘Exit through the gift shop’ Banksy: “Uhmmm… You know… it was at that point that I realized that maybe Thierry wasn’t actually a film maker, and he was maybe just someone with mental problems who happened to have a camera” (So much on cinema around here feels like it was made by Thierrys so this quote was a home run)