My one favourite place when in London is a Borders Bookstore.  I have spent many pleasant hours is their flagship store on Oxford Street. 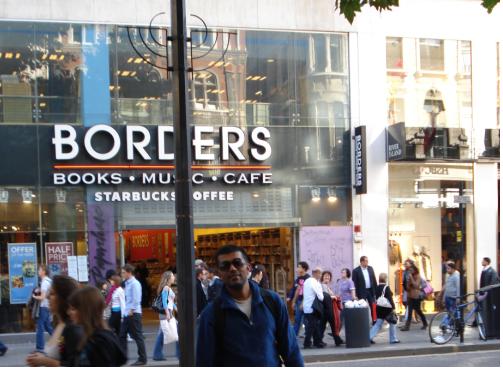 The third floor there has a Starbucks where you can, after you have vacuumed for your favourite books from the stores’ aisles below, ordered a latte, proceed to waste the day in one of the comfortable lounge chairs scattered throughout the store. I did sometimes end of purchasing a few books but I suspect most folks just read the books, bought the coffee and walked away when they were done with the former. Probably the only one thoroughly profiting was Starbucks.

Here are some facts I was able to collate from the net on Borders and its competition:

Borders : As of January 30, 2010, the company operated 511 Borders superstores in the United States….On February 16, 2011, the company announced that it had filed for Chapter 11 bankruptcy protection. In 2011 Borders finished 40 years in the business with 19500 odd employees. The last time Borders made a profit was 2006. Its yearly income has dropped by $1 billion in the four years since then.

Barnes & Noble : It is the largest book retailer in the United States, The company operates 717 stores and on Aug 3, 2010, BN announced that its board was considering a sale of the company, possibly to an investor group.

Amazon.com :  Is a US-based multinational electronic commerce company. It was founded it in 1994. In 1999, Time magazine named Bezos ‘Person of the Year’, recognizing the company’s success in popularizing online shopping. It market cap now is $78 billion and revenue is at $34 billion.

Thing is I love Borders AND Amazon and would love to see both of them around for a long time. But in reality, out of every 100 bucks I spend on books, Amazon gets 99 and Borders gets 1. Because Amazon is cheaper and convenient. Maybe because they don’t pay rent on a bookstore in the middle of Oxford street.

In 1994 (when Amazon was founded) I am willing to bet the CEO, COO and CFO of Borders and Barnes & Noble, along with their core senior team must have been part of numerous expensive ‘annual strategy sessions’, golf retreats and  team building exercises. There would have been people in that group from good B-Schools, familiar with Porter’s 5 forces model. And NO ONE in that group would have dreamed that in less a decade they would be done. Finished.  And the double shocker would have been the added wound that it wasn’t because of the other guy (Borders vs B&N). Like Coke finding out they were beaten in the end not by Pepsi but by …Airbus (?!) 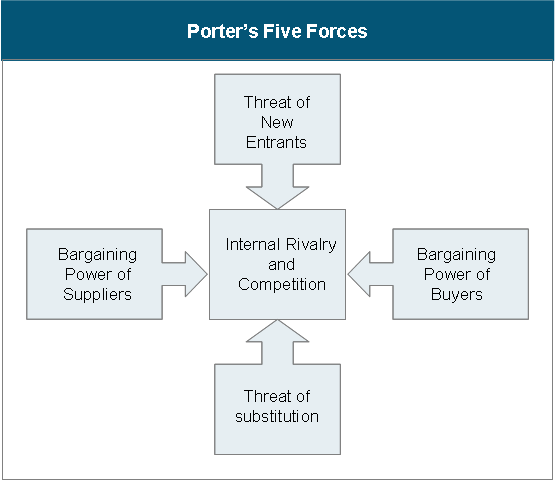 The top and bottom (amazon, e-books), did them in. If an overpaid consultant had told the book guys in one of that 1994 retreats that they all need to look at their business threat radar for ‘an online book store outselling them soon’ would it really registered in their mental model of the world they knew or would they have laughed the guy out of the room ? Mental Models are our fixed ideas of how the world works and how things should or shouldn’t be done.  We accept these models so completely that we live our lives according to them.  Everyone has mental models, but we call them by other names, like “truth” or “reality” or “the facts.”  We believe them absolutely.

My contention : “We have an unsustainable business model“. That’s a sentence every C-suite occupant (the ceo,coo,cfo,cto..) should put on a laminated card and carry in his pocket.